I took the kids to Pittencrieff Park in Dunfermline today, and it truely was a trip down memory lane for me, I used to live in Dunfermline for 24 years until I got married and moved away to the village where I now live..

Many a time my friends and I would spend time down the glen, long summer holidays spent there.   Some of it still remains the same as I remember it, the only real big change is the animal enlosure, now boarded up and closed down, which is a great shame.

At the bottom of the glen, which lies at the foot of the Old Dunfermline Palace, there are lots of caves and hiding places, some with historical interest… like Wallace’s Well

Just along the path from Wallace’s Well is this lovely bridge….

Pittencrieff Park or “The Glen” as it is known affectionately by the local populace extends to 76 acres and was given in trust by Andrew Carnegie to the people of his birthplace, Dunfermline.

Before it was purchased in 1902, by Andrew Carnegie, Pittencrieff Park formed the estate and grounds of the house, owned by the lairds of Pittencrieff.

Pittencrieff House Museum is a historic house with a difference. The 17th century shell has a 20th century interior. Although there is no furniture, there are 3 display galleries with beautifully plastered ceilings. Here you can begin to discover, among other things, the history of “Dunfermline Toon”, who was Dunfermline’s giant and what clothes were worn in those days. The story of the house reveals a number of owners, the last of whom was Andrew Carnegie. He never lived in the house however, and eventually gave it to the citizens of Dunfermline. 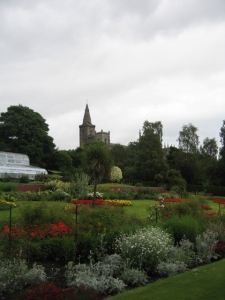 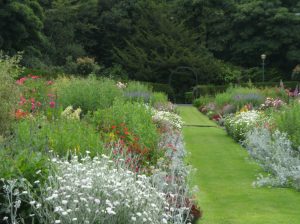 Laid out, colourfully in front of the Glass Hall conservatory is a Formal Garden. In days gone by this area was used by Pittencrieff House as a kitchen garden and orchard. Now developed round the laird’s walk with its own breathtaking vistas of the Abbey and Palace ruins, the garden is a kaleidoscope of colour throughout the spring and summer. It is a peaceful, relaxing setting in which to idle away the afternoon in the warmth of a summer sun.

Completing the formal gardens is the 200ft Glass Hall conservatory. Built in 1973 on the site of the old conservatories the present structure is divided into three sections. The main area with its wooden bridge over the running stream and its regal display of flowers creates for the visitor an entire new world, the exotic plant world. Distributed throughout the three areas the visitor can see on exhibit plants from many countries. Look out too for the exhibit which features the fossilised trees.

We took a wander around the formal gardens which were full of beautiful flowers…. 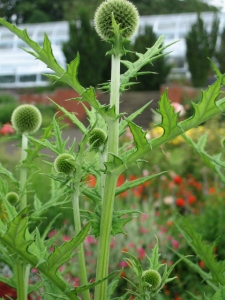 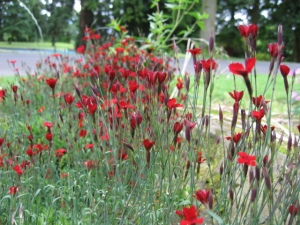 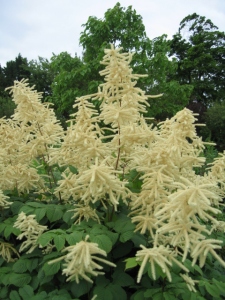 From the formal garden you can look over towards Dunfermline Abbey..

I enjoyed my trip down Menory Lane 🙂

The words that many of us join hands and sing at the strike of midnight are written in old Scots, the language commonly spoken in Scotland until 1707 when Scotland’s Parliament dissolved itself and was merged with England. The words were adapted by Rabbie Burns, Scotland’s National poet, from a traditional poem.

Words adapated from a traditional song by Rabbie Burns (1759-96)

And surely ye’ll be your pint-stowp,
And surely I’ll be mine,
And we’ll tak a cup o kindness yet,
For auld lang syne!

We twa hae run about the braes,
And pou’d the gowans fine,
But we’ve wander’d monie a weary fit,
Sin auld lang syne.

We twa hae paidl’d in the burn
Frae morning sun till dine,
But seas between us braid hae roar’d
Sin auld lang syne.

And there’s a hand my trusty fiere,
And gie’s a hand o thine,
And we’ll tak a right guid-willie waught,
For auld lang syne

Taken as part of the 7 Days of Shooting Flickr group with the theme Signs Notices and Plaques … this is my entry for today.. its traditional tuesday..

This picture is that of an ancient spring in the village of North Quensferry, Fife, Scotland.

The huge cantilever sections of the rail bridge spanning The Forth are one of the most familiar landmarks of Scotland. Completed in 1890, the Forth Rail Bridge was constructed from 54,000 tonnes of steel, 194,000 tonnes of stone and concrete, and in excess of 21,000 tonnes of cement. This was the largest steel bridge in the world, using approximately 7,500,000 rivets produced by The Clyde Rivet Company. Success was not without its casualties and, throughout the course of construction, 57 men lost their lives.

This wide expanse of river had always been important to trade, and the crossing was notoriously difficult at times. Storms were often experienced, resulting in the loss of possessions and life, the ferrymen were unreliable, and it was not uncommon to encounter pirates during the eighteenth century. With a steady increase in both passenger and freight traffic, Parliament recognised that action needed to be taken to improve the facilities and make the route safer. Several suggestions were put forward early in the nineteenth century to provide some kind of ‘fixed link’ across The Forth, but it was with the arrival of the railway that discussions became serious. In 1854 Thomas Bouch, a consulting engineer to The North British Railway, submitted his proposals to bridge both The Tay and The Forth. Following initial scepticism, Bouch’s plans for The Tay Bridge were finally given approval in 1864 and construction began in 1871.

By 1873 Bouch had been commissioned to design The Forth Bridge, similar in concept to his original drawings of the late 1850s. With The Tay Bridge under construction, work on the new Forth bridge was delayed for five years, but the foundation stone was eventually laid in 1878. Thomas Bouch had subsequently received a Knighthood for his Tay crossing, but his career ended abruptly in December 1879 when the bridge collapsed in a violent storm, resulting in the death of 75 people. Pending an enquiry into the safety aspects of Bouch’s design, work was immediately halted on his Forth suspension bridge.

When The Forth Bridge Railway Company were formed in 1882 to construct and operate the new bridge, they adopted the rather radical design proposed by Benjamin Baker and Sir John Fowler. Parliamentary consent was given in July to begin construction on the innovative cantilever structure, and the contract was awarded to William Arrol on 21st December. The three main cantilevers were completed and in place by 1887, but the final operation of joining the girder booms to close the gaps rested on the prevailing climate. In less than eight years The Forth Rail Bridge was completed, the official opening ceremony being performed by HRH The Prince of Wales on 4th March 1890. On this prestigious occasion, attracting members of the Royal Family, MPs, consultant engineers from home and abroad, and directors from other railway companies, The Prince of Wales placed the final gilded rivet in place.

Today the bridge, now a ‘listed structure’, still carries about 150 trains each day across The Forth, and has been regularly maintained over the years. An extensive five-year refurbishment programme was undertaken at the turn of the millennium, costing in excess of £40m, and employing somewhere between 150 and 300 men per day, six days a week. At an average height above the general water level of some 361ft (109m), the exposed conditions on the Forth Rail Bridge can prove very hazardous but latest techniques, and anti-corrosion products, have greatly reduced the maintenance involved. It used to be said that as soon as the painting team had reached the far side of the bridge, it was time to start over at the beginning.

All content including text, photographs and design work are © Townie Cards. All rights reserved. These designs are shared for personal inspiration use only. Designs may not be copied for the purpose of publication or contest submissions. Thanks for your support!